[Ph.D. Dissertation] My research examined the the mechanism of action for Virtual Embodiment to reduce pain. Virtual embodiment has been defined as the sense of owning and controlling a virtual body in a VR environment by researchers such as Mel Slater. Virtual Embodiment includes three critical aspects: ownership, agency, and self-location. In this dissertation, my research manipulates two elements of virtual embodiment, sense of ownership and sense of agency, and measures the effect on pain reduction in healthy subjects and chronic pain patients. This research could lead to a better understanding of the mechanisms of action for VR pain relief, which could inform future development of more effective VR analgesia environments.

Among all non-pharmacological treatments for pain, immersive VR has shown outstanding promise for acute and chronic pain management. The effectiveness of the VR distraction approach has been validated with evidence from acute and chronic pain patients. Although the underlying mechanisms of VR analgesia remain unclear, two primary approaches have been widely studied in VR for pain management – distraction (directing attention inwardly or outwardly pain away from the pain) and virtual embodiment (sense of embodiment in VR). Virtual embodiment is another leading theory explaining the mechanisms of action for virtual reality analgesia.  However, clinical researchers have primarily focused on the “distraction” approach for VR analgesia. Therefore, in this research, my goal is to understand the effect of virtual embodiment in VR on pain management.

Prior studies suggested that feeling the sense of ownership of a mirror or virtual hand can affect one’s pain perception, potentially by altering one’s body-self pain network. VR researchers used the analgesic effect of rubber hand illusion (RHI) to explain the mechanisms of why seeing/viewing a virtual body can reduce one’s heat-induced pain. Also, mirror movement in VR successfully reduced phantom limb pain and findings suggests that feeling embodied in the virtual body is critical to phantom limb pain reduction. However, most of these studies were conducted with healthy subjects under induced-pain, and ownership has been the primary focus. Few of them looked into the potential influences of agency, and different pain types can also impact the analgesic effect. Therefore, in this dissertation, I would like to investigate if varying levels of ownership and agency correlates to pain reduction in chronic pain patients.

Research Question:
Does varying sense of ownership and agency in a virtual environment correlate to levels of pain reduction in healthy participants?

Method:
I recruited 18 healthy participants in a within-subject study. All participants saw three visual conditions in VR and they were asked to perform the same hand-movement task. 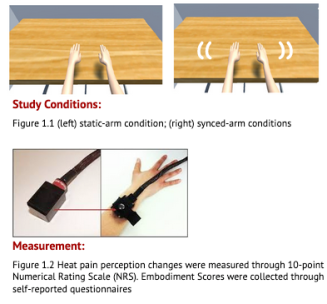 Contributions
Findings showed that seeing virtual arms can significantly reduce heat-induced pain, but this study did not reveal any advantage for virtual embodiment with synced-arms. Previous studies have yielded conflicting results regarding the correlation between sense of ownership and pain reduction.

Research Question:
Does varying sense of ownership and agency in a virtual environment correlate to levels of pain reduction in phantom limb pain (PLP) patients? 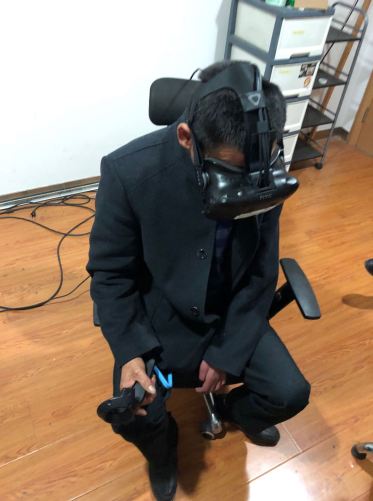 I recruited five PLP patients to practice two motor tasks for ten VR sessions over six weeks. In VR, patients “inhabited” a virtual body and the movements of their intact limb were mirrored by the virtual limbs. The VR environment provided them with the illusion that their phantom limbs responded as if they were both intact and functional. The therapy engages the patient through small motor and large motor tasks to make it more effective and interesting.

Results:
“I had a dream yesterday, and I saw my right hand and arm moving! It felt so good and so vivid that I can still remember.”
— Patient 5
Results showed significant improvement in five PLP patients with different intensity and presentation of pain. Participants reported a mean of 21% less pain in each session and a mean of 19% less pain on the VAS over the course of the 10 sessions. Virtual embodiment was measured with a paper-questionnaire and an interview after each treatment session. All participants reported significantly higher ratings of Ownership and Agency after the last session. 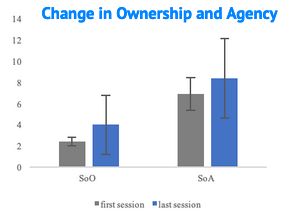 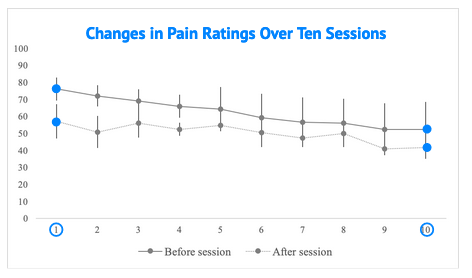 Contributions
To date, most studies of PLP have been short-term interventions with two or three participants. My study followed five PLP patients over one month and 10 treatment sessions. This study is also unique in achieving significant pain reduction through movement of a phantom limb in VR. This study suggests important design implications for future VR interventions for PLP.

Research Question:
Does varying sense of ownership and agency in a virtual environment correlate to pain reduction in CRPS patients?

Manuscripts for study 1 and study 3 are under submission.